My mother taught me how to prepare some Cape Verdean dishes like Cachupa.

A short story about the Cape Verdean kitchen and how i and my mother cooked for a whole office.

Most guests in the office never tasted this dish before. So this was really special for them. The responses were priceless and alot guests came back for more!

Cachupa is the best known national dish of Cape Verde. The basis of this dish is a bean, corn and cabbage stew. Depending on availability, this is refined with meat, vega or fish. There are many delicious varieties of this dish. With this they make a nutrient-rich dish. On the Cape Verde islands you can order cachupa in most restaurants, both in the afternoon and in the evening.

It's also delicious to eat cachupa for breakfast in combination with a fried egg.

Due to the difference in the supply of ingredients and the diversity of the wonderfull islands, there are many ways to prepare cachupa. Everyone is proud of their own variant cachupa. The preparation is therefore highly dependent on the island and also family recipes.

Cachupa is the national dish of Cape Verde. 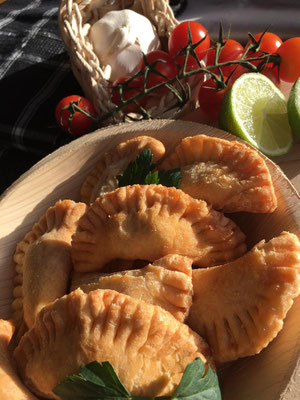 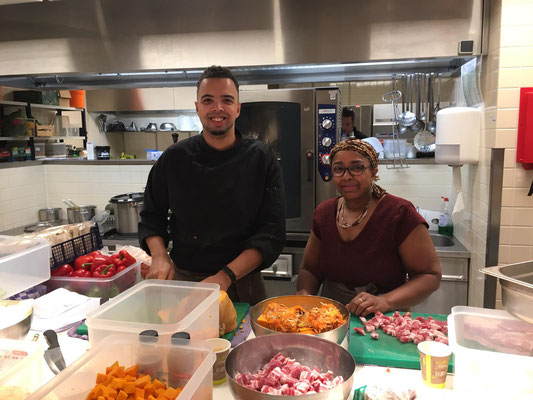 Because of its rich history, the cuisine of Cape Verde is a mix of mainly African and Portuguese influences. Tuna is the national fish species and you can taste various delicious variations. For example, lobster, squid, swordfish, perch, dorade, octopus and mackerel are also caught fresh daily and prepared immediately. You can find some Portuguese influence in the desserts. Lots of fruit and tasty pastries. But also in warm dishes such as goat meat, salted pork or delicious sausage. If you ever go to Cape Verde try it out and enjoy the delicious Cape Verdean cuisine.

The country and the people feel like a fused mix of African, Caribbean and European influences. To understand this eclectic mix, you have to go back in time. Cape Verde was uninhabited until the Portuguese arrived in 1456 and colonized it. Since 1975 the country has been independent and one of the most stable and prosperous democracies in Africa. Because for centuries ships from all corners of the world always stopped, Cape Verde has a special culture that is unique and unique, but at the same time adopted all kinds of elements from other cultures.

These beautiful islands are located in the Atlantic Ocean about 500 km west of Senegal, and has a fascinating mix of mountains, beaches and peaceful villages on the coast. Despite its small size, the country has a large global musical influence with dozens of top artists. It also has several world famous dances.

The official language of Cape Verde is Portuguese, but on the street people speak Creole, this is a mix of Portuguese and other languages. Every island has a different kind of Creole. From the way a Cape Verdean speaks Creole, one can tell from which island he or she comes. Part of the population speaks a third language, in addition to Portuguese and Creole, English or French.

Cape Verde has various dances, such as Zouk ( Zouk-love, Cabo-Zouk), Funana and Batuque ( Batuk ). They also dance Coladera on the southern islands. There is also a lot of Kizomba and Kuduro, these are originally from Angola, but have been adapted to the Cape Verdean dance culture since the beginning of their existence.

Cape Verde is relatively one of the countries with the most talented artists per inhabitant. The island state is small but is internationally known for its big names and famous such as Cesária Évora, Tito paris, Mayra Andrade, Cordas do Sol, Lura, Sarah Tavares and Nelson Freitas, Mika Mendes, Djodje and many more. 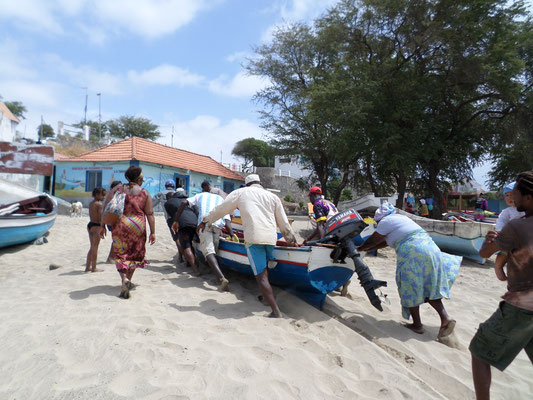 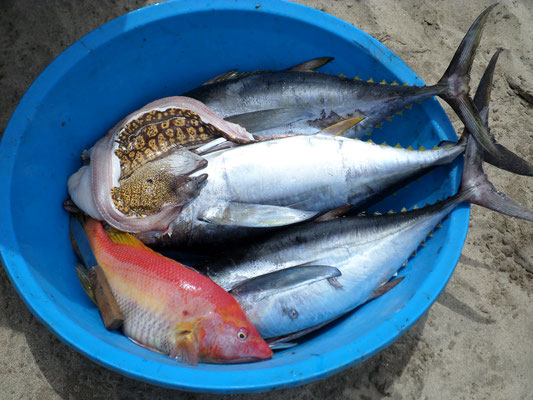 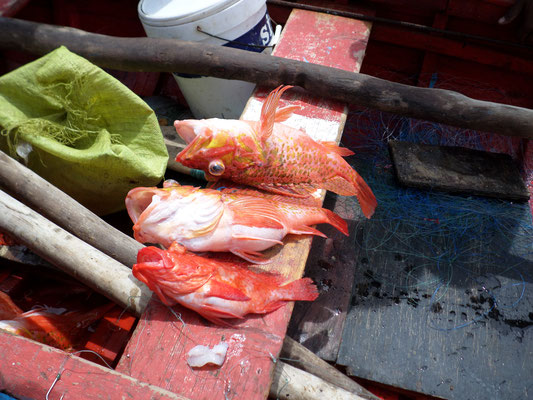 One day I thought it would be fun to cook Cape Verdean at work. It was the first time that i did this kind of cooking for office..  Because it is quite a lot of work to prepare Cape Verdean food for 170 people.  Normaly it almost costs a whole day to cook for a family at home.

There was only one solution to do this, cooking with help. And there is no better help than someone who can cook Cape Verdean like no other. So the decision was made quickly, cooking together with my mother.

This special collaboration with my mother brought a lot of attention to it.

Many guests came by in the morning to watch what we were cooking.

This was a wonderfull experience for the both of us, and for my mother was really excited to see my working place.

Luckily I get along well with my mother so working together wasnt a problem. Another challenge was that we had made two types of cachupa (stew). One with meat and the other version was vegetarian and we had never done this before. Normally you get a lot of flavor from the pork base. With the salt from the pork you can balance with the taste of the dish.

This time we added more vegetables such as pumpkin and tomatoes for the vegetarian version. The end result was amazing!

Below the pictures you can see the menu we cooked that day! 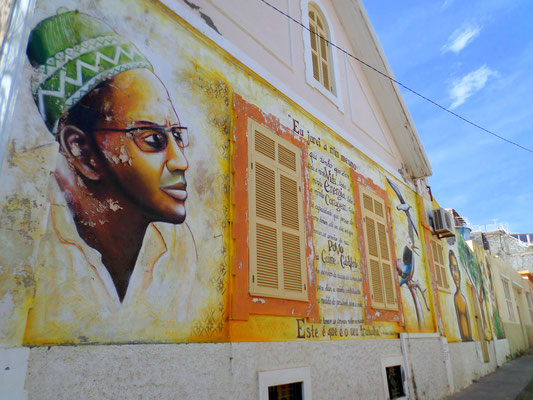 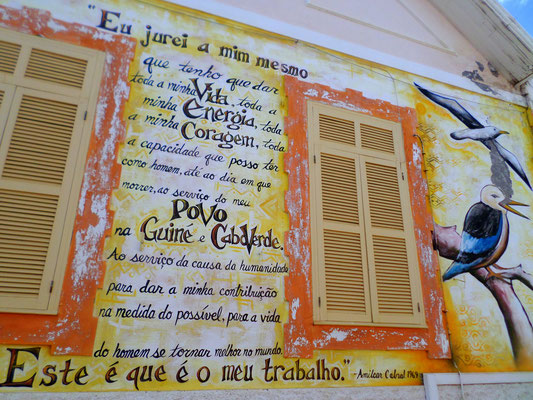 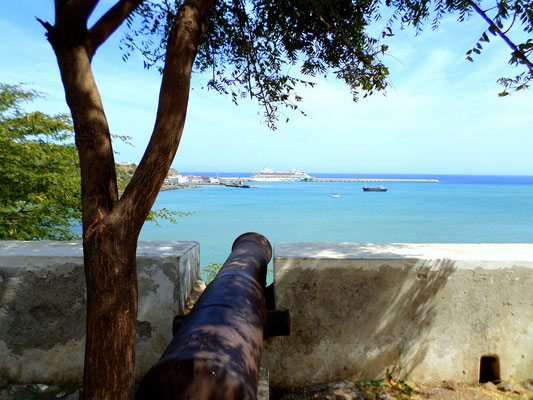 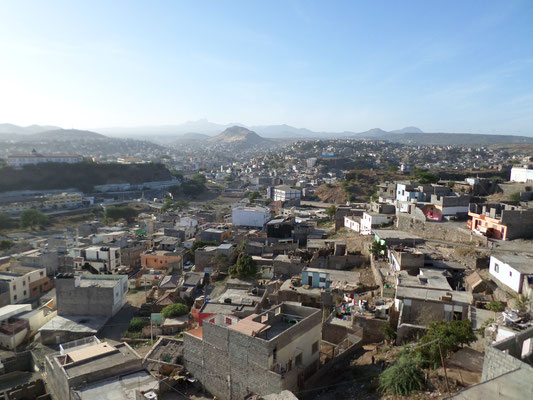 Baked banana with a sweet taste.

The outside of the guanabana fruit is green and spiny, yet inside there is white, sweet and tart flesh that can be eaten fresh or used in smoothies or milkshakes.

This very large fruit with green skin needs to be harvested carefully due to its large size and soft flesh.  It tastes like a combination of pineapple, banana and strawberry.

This fruit is rich in Antioxidants. What is good because vitamin C promote cell health and repair. 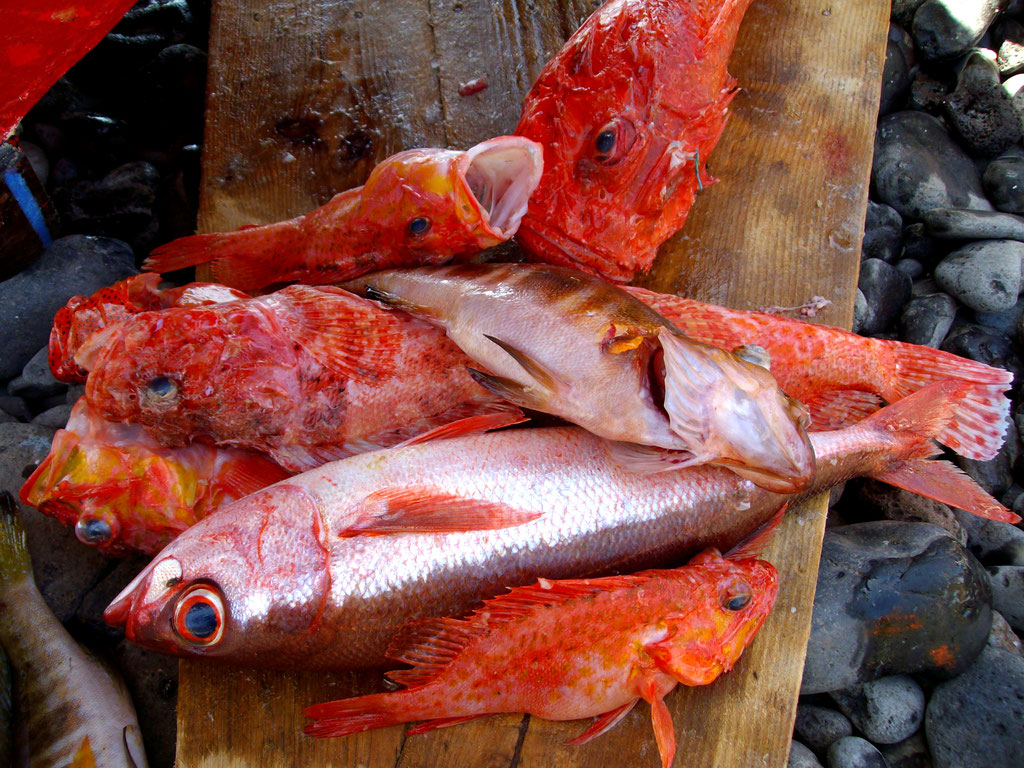 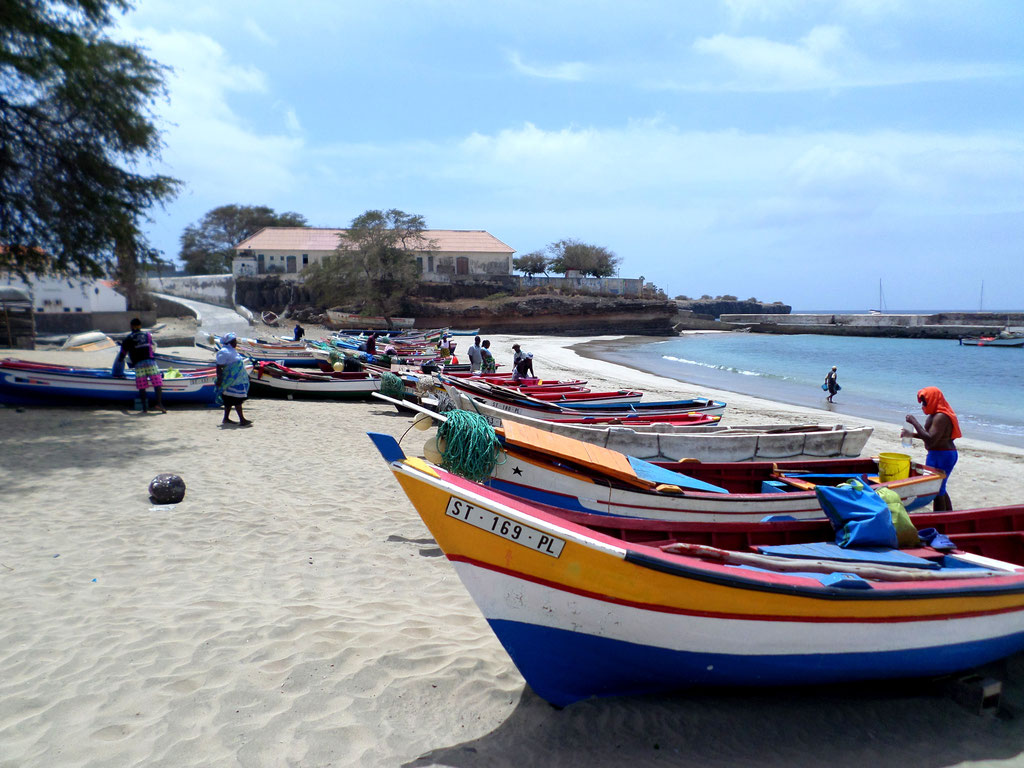 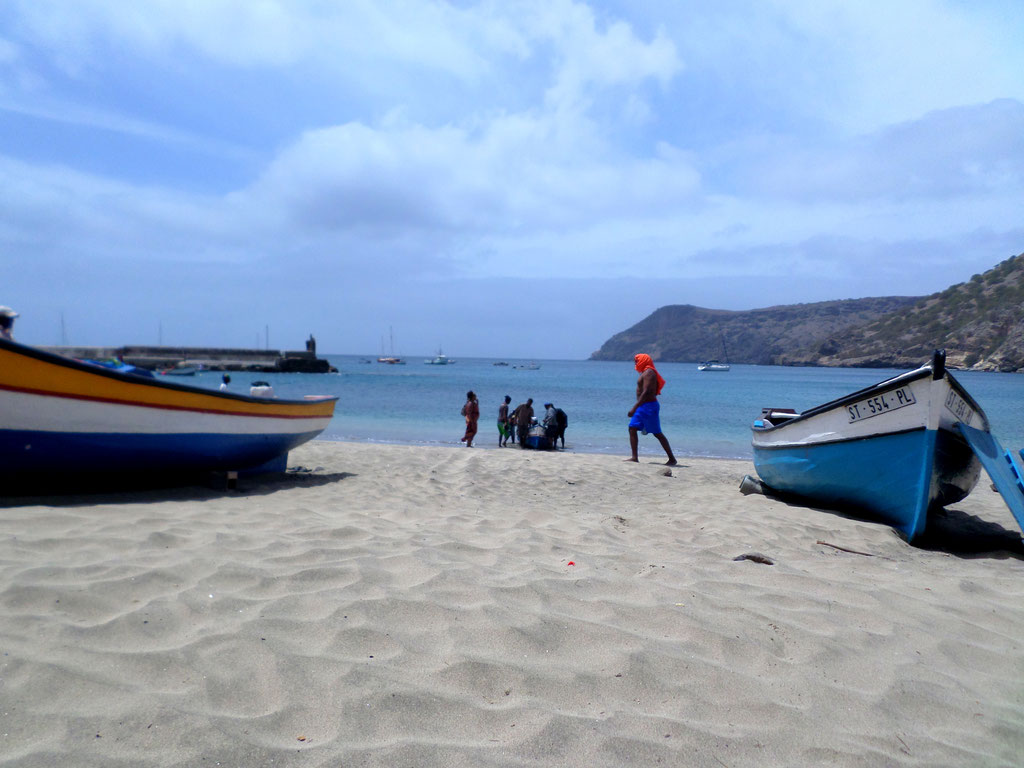 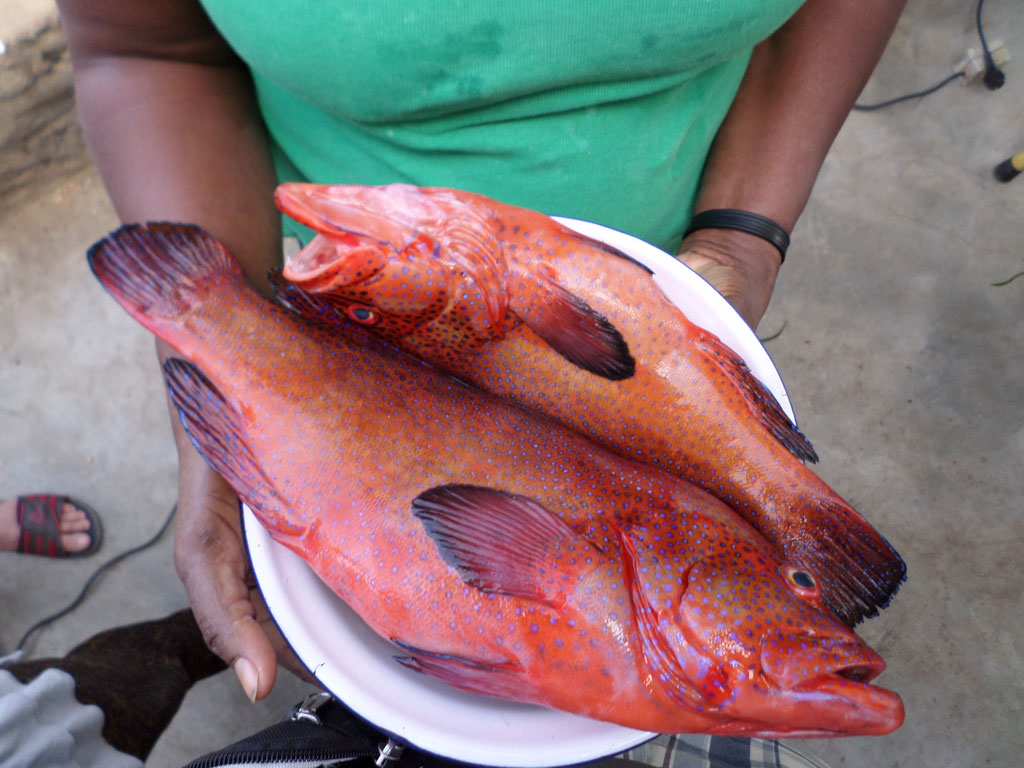 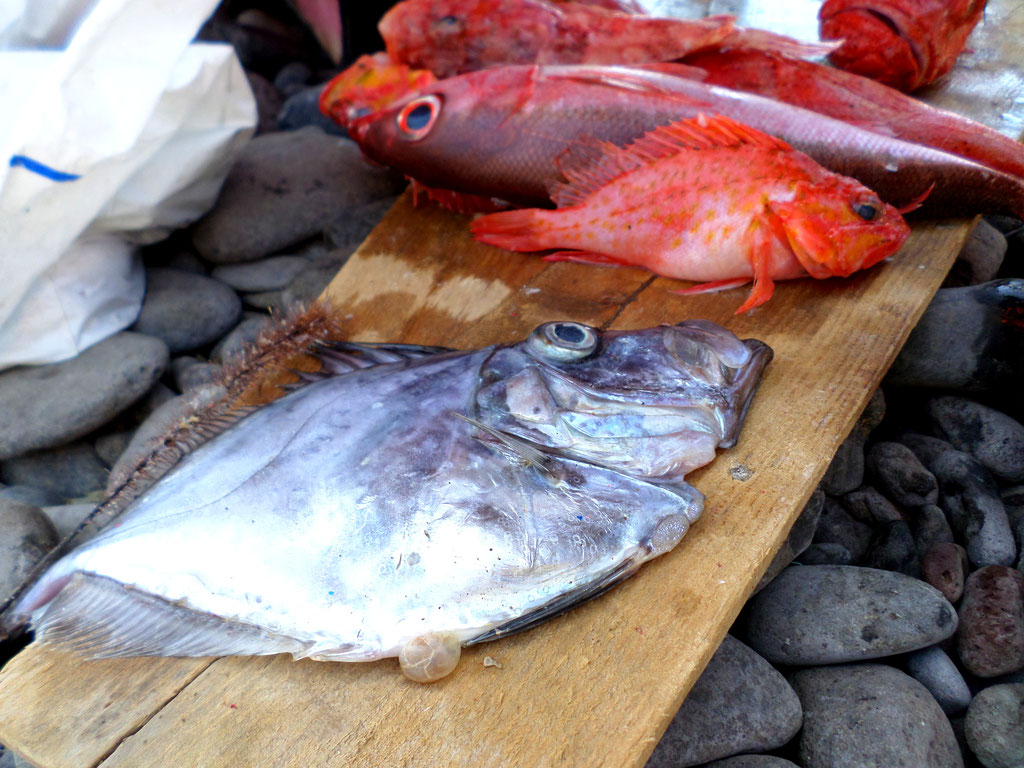 Vegetarian food in Cape Verde isn't hard to find. In the restaurants there are many fresh vegetables from the country, different types of fruit, cheese, eggs, milk, beans, lentils and other products for a healthy and varied vegetarian diet.

Its also great to visit the fish markets in for example in Assomada on Santiago. Where you can find wide variety of fresh fish. In addition to fish such as yellow fin tuna, wahoo, dorade, lobster, marlin, swordfish, you also see smaller fish such as sea bass and seafood like pulpo/octopus. Early in the morning you can find the best and freshest selection. In many villages such as Tarafal on Santiago you see fishermen with small wooden boats coming in the morning and usually the best fish, you can also buy from their fish which is often cheaper than at the market. On the market you have more choice and you can compare prices. But if a fishing boat spontaneously comes ashore with fish, I would definitely recommend to see what the catch is.

Some islands are very fertile. Walking through valleys in Santiago you see mango growing alongside banana and papaya and tomato plants, but also beans, corn, potatoes, cassava and sugar cane. Due to the construction of dams on Santiago, irrigation is now possible all year round and more and more food and drink is locally sourced in Cape Verde. Although sweet, pastries and cookies are also popular, the rest of the kitchen is predominantly savory. The Cape Verdean cuisine is tasteful but does not stand out with strong flavors or spices such as in Asia and is also not very spicy as in South America for example. It is more pure and balanced.

These are a number of translated ingredients in the Creole language that are often used in dishes. 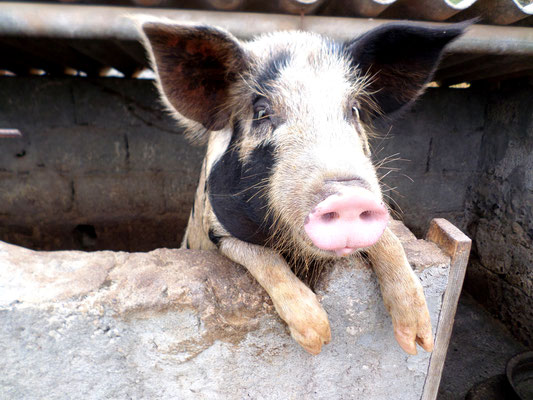 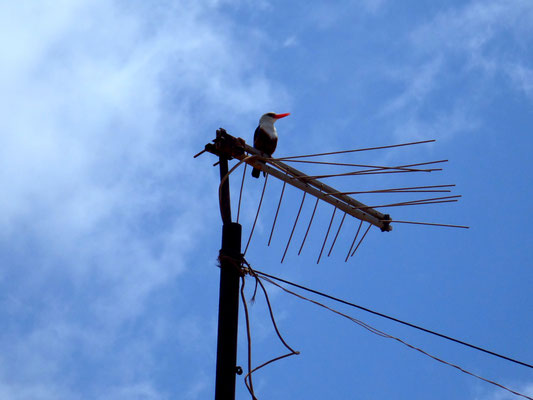 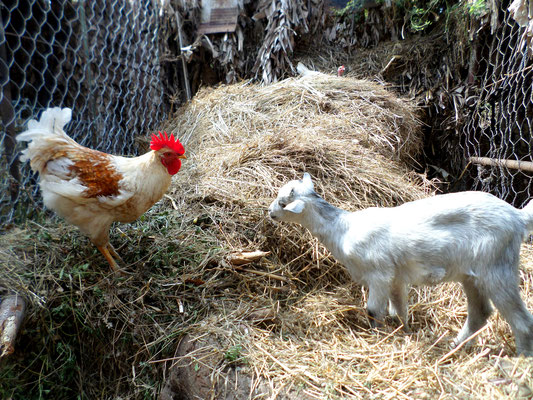 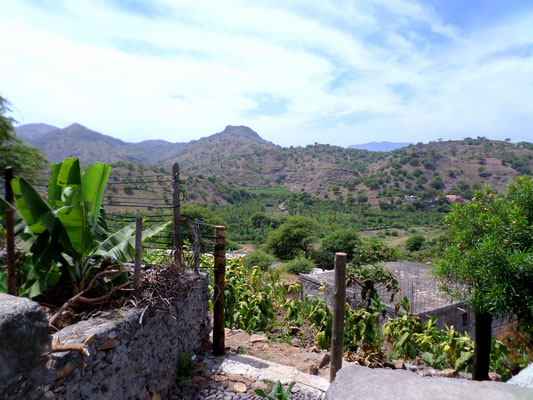 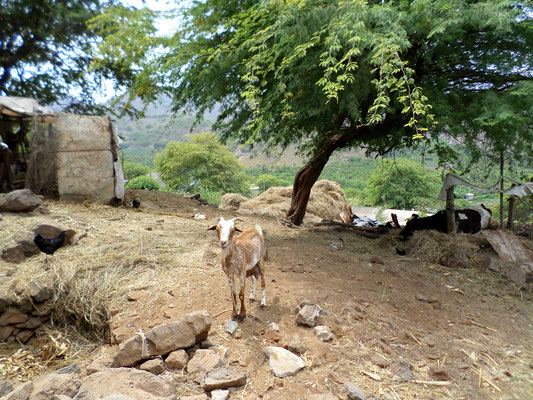 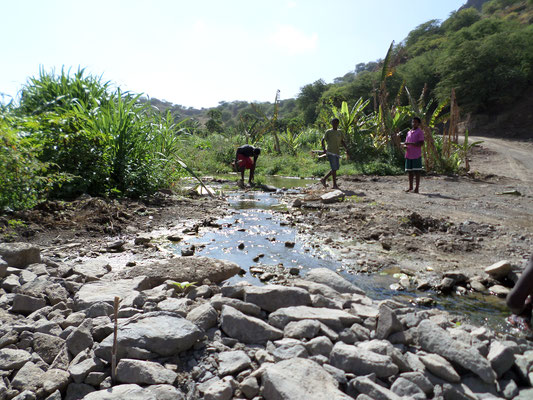 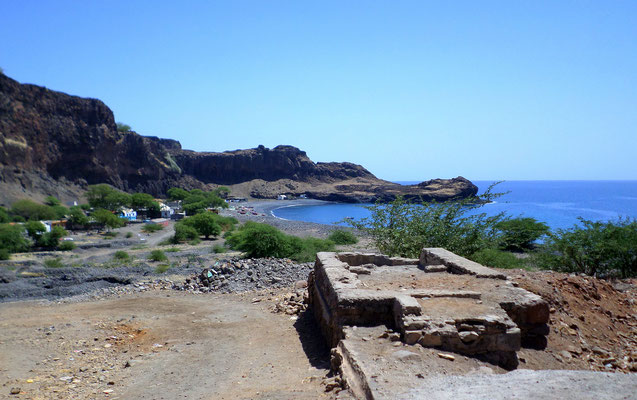 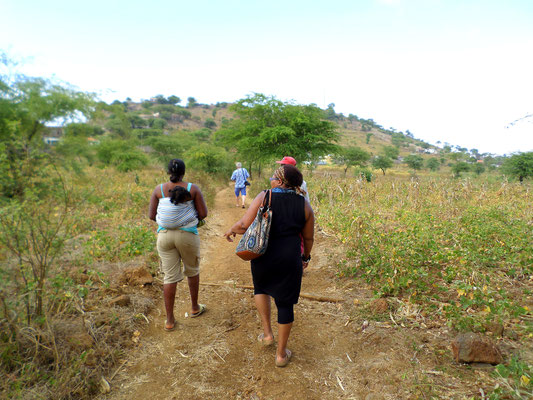 My mother is originally from the village of Santa Cruz, where we still have a lot of family.

It has become much greener in recent years but there were some years that the country was suffering from long drought due to too little or no rain. Near the village they made a dam called "Poilão Dam" which is the first officially built dam located on the island of Cape Verde, In this area it is very fertile and green.

Nearby there is a small city called Pedra Badejo which lies on the eastern coast of the island Santiago. The beach has black volcanic sand. In the summer, events are organized such as a festival Areia Grande with varied artists from the country. It is well organized and safe for tourists, these types of events are also in the capital Praia.